Hey everyone! Today, Chrys is visiting to share tips on creating titles for stories. Take it away, Chrys!

Alternative Titles for Seismic Crimes
Coming up with a title can be tricky. Sometimes we come up with a great title right away. Other times, we’re half-way through our first draft when a title comes, or even after we’ve edited our manuscript several times. Occasionally, our titles change during the writing process if we come up with something better.
3 Tips to Name a Book:
1. What’s the tone/mood/theme?
My published books are dark and suspenseful. Death and crimes are common. Immediately when you read Seismic Crimes you know what kind of ride you’re in for.
2. Think about the main character.
For a paranormal story, it’s clever to add the type of supernatural being that your MC is to the title. Or to at least hint at it. For example: Despite the Fangs by Dylan Newton is about a woman who is the Alpha of a werewolf pack.
3. What happens in the story? (What’s the plot/purpose?)
In The Hunger Games by Suzanne Collins, Katniss Everdeen has to fight in a deadly competition called the Hunger Games. What happens in your story? What does your character have to do? Consider your answers and see if a title pops out at you.
When I decided to write a sequel to Hurricane Crimes, I knew I wanted to link each title in the series with a disaster and the word “crimes”. With an earthquake as the disaster, I compiled a list of possible titles:
Earthquake Crimes
Quaking Crimes
Richter Crimes
Fault Line Crimes
San Andres Crimes
But one edged them out: SEISMIC CRIMES
Seismic describes earthquake activity but it also works as an adjective. When I think seismic, I envision monstrous chaos.
QUESTION: Do you think I chose the best title? 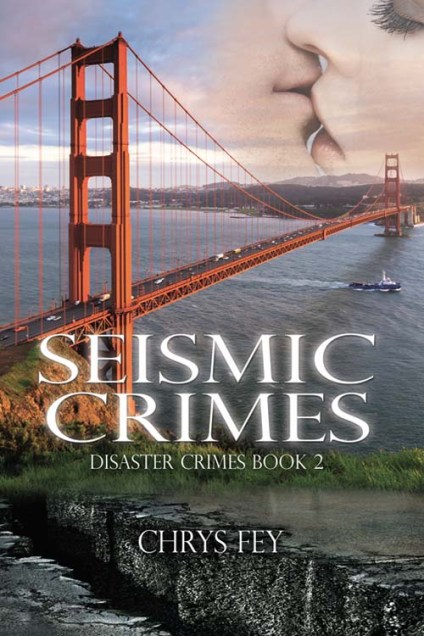 Title: Seismic Crimes
Author: Chrys Fey
Series: Disaster Crimes Series (Book Two)
Publisher: The Wild Rose Press
Format: Digital and Print
Page Count: 282
DIGITAL LINKS:
Amazon US / Amazon UK / Amazon CA
NOOK / KOBO / All Romance eBooks
PRINT LINKS:
Amazon US / Amazon UK / Amazon CA
The Wild Rose Press
BLURB:
An Internal Affairs Investigator was murdered and his brother, Donovan Goldwyn, was framed. Now Donovan is desperate to prove his innocence. And the one person who can do that is the woman who saved him from a deadly hurricane—Beth Kennedy. From the moment their fates intertwined, passion consumed him. He wants her in his arms. More, he wants her by his side in his darkest moments.
Beth Kennedy may not know everything about Donovan, but she can’t deny what she feels for him. It’s her love for him that pushes her to do whatever she has to do to help him get justice, including putting herself in a criminal’s crosshairs.
When a tip reveals the killer’s location, they travel to California, but then an earthquake of catastrophic proportions separates them. As aftershocks roll the land, Beth and Donovan have to endure dangerous conditions while trying to find their way back to one another. Will they reunite and find the killer, or will they lose everything?
HURRICANE CRIMES 99¢ SALE!

BIO:
Chrys Fey is the author of Hurricane Crimes, Book One in the Disaster Crimes series, as well as these releases from The Wild Rose Press: 30 Seconds, Ghost of Death, and Witch of Death. She is an administrator for the Insecure Writer’s Support Group and has participated in the Blogging from April A to Z Challenge.
When Fey was six years old, she realized she wanted to be a writer by watching her mother pursue publication. At the age of twelve, she started writing her first novel, which flourished into a series she later rewrote at seventeen.
Fey lives in Florida and is always on the lookout for hurricanes. She has four adopted cats who keep her entertained with their antics, and three nephews who keep her entertained with their antics. You can connect with her on Facebook, Twitter, and through her blog, Write with Fey. She loves to get to know her readers!
AUTHOR LINKS:
Website / Blog / Facebook / Twitter

9 thoughts on “Chrys Fey on Titles”

I'd love to know what you think, so please leave a comment! Cancel reply

This site uses Akismet to reduce spam. Learn how your comment data is processed.